While most skaters can tell you about the moment they knew they wanted to join roller derby, not many can pinpoint that moment when they realized they were not just a skater, but an athlete. So much of the freshmeat process is focused around learning the skills, that the athletic components don’t play too much into your training. At some point though, you will realize that you have plateaued, or that you can’t keep up with the other vets, or that you just aren’t recovering from a bangover like you used to, or that you just aren’t getting enough out of your game. That’s the moment where you start transitioning from skater to athlete. Becoming a roller derby athlete looks different for every skater, but usually the process will include a change in attitude on and off the track, cross-training in some form, developing pre and post bout rituals, special attention goes to the food going into your body, practicing like you play, seeking out feedback from teammates or coaches, injury prevention techniques, extensive research into improving your gear (which is a never-ending process), watching bout footage for more than just how you look, but what you are DOING out there and how you can use the bout footage to improve your game the next time you take the track. Your loved ones will often notice this change at some point during this process, because everything you do starts to revolve around roller derby. You start making goals, training, and picking up every possible opportunity to skate. Your derby clothes often start to look different during this transition; fun tights, bandanas and knee socks get moved to the back of the drawer to make room for compression pants, sweat wicking socks and athletic headbands. Your non-derby clothes often start fitting different as well, buying jeans becomes hell on earth.

From one of the queens of modern day roller derby:

“Most seem to find roller derby in transitional periods. We ruin our bodies to save our souls, and for some reason that makes perfect sense.” -Bonnie D. Stroir

Roller derby starts out as something fun to try or check off your bucket list, eventually becomes something much bigger than you ever imagined and you find yourself along the way. You find out your body can do things you never thought possible, your mind eventually learns to get out of the way, and you grow as a person by getting out of your comfort zone. You start to think like an athlete, then you look back and barely recognize your pre-derby self. Transitioning from that starry eyed newbie becomes your biggest accomplishment. Roller derby is all about what you put into it, and no two skaters will have the same journey.

Here’s what some veteran skaters from Prairieland Punishers had to say about their transition from skater to athlete.

-Assaultine Cracker Jackers: “In 2010, I had not been in a sport since starting college, and I jumped at the opportunity to try something new as one of my friends was starting a roller derby league. I loved the idea of the challenge, and thought my athletic background would definitely help. The team didn’t have a coach or much to model after, so the first few months were spent skating in circles and around cones (without gear!) Eventually through the help of other leagues and a lot of internet browsing, my team was ready to play their first bout. It was a mess. Over the years, the league grew. In 2012, I was drafted to the B team, and that was the moment I knew I needed to step up my game. I spent that season as captain of the B team and learned a lot about myself as a skater. It was the most heartbreaking and motivating thing that could have happened. I got a gym membership, started cross-training almost every non-practice day, got my post-college diet under control, lost 50 pounds and cut 40 seconds off my lap time. The transition came from a place of proving to myself and my team that I was able to keep up on the track, and my league responsibilities were no longer more important than me as a skater and athlete. The cool thing about being an athlete in an evolving sport, is that the fight is never over, there is always room to grow in roller derby!”

-Jeri Kelly: “I realized I had reached a point in my derby career where I wanted to be more athletic and dedicated to my sport when I began to seek out experiences in roller derby beyond my own league’s practices and bouts. I started cross-training and eating healthier, and I quit smoking. I signed up for all kinds of mixers, visited other leagues’ practices, and started playing co-ed derby, along with watching more high-level bout footage. I began going to the skatepark to learn ramp skating, attended more open skates at the local rink, along with trail skating to boost endurance. For me, I suppose the transition from derby girl to athlete really came about through making positive lifestyle changes and seeking out a variety of experiences on skates to make myself the best player I could be. I’m still working to get better and stronger, and play harder and smarter.”

-Bebe Tango: “The biggest moment of change happened for me after I tore my ACL. I have always been competitive and wanted to win. I took derby as seriously as ever but I never truly took care of my body. As a result I found myself injured and out of the game I loved for 13 months. I coached and worked out as hard as possible to jump back in strong and with a focused mind. I started power lifting again; I forgot how much I missed it. I was taking care of my body off the track. I don’t think it’s possible to ever go back to how things were. I know I’m a strong athlete and the results show when I put my skates on.”

-Funky Cold Bredina: “When people ask me “Why did you take up roller derby?” my honest response is “because I had never done it before”. I grew up skating, so the idea of putting on skates again (even though it had been 15 years since I had last skated) didn’t seem like a stretch.

I first started playing derby with a team that had “try-outs”. The first turning point from being a skater to an athlete was when I got a phone call saying that I had made the team. I was terrified, I saw how hard the other skaters were working and saw their dedication and realized that the same would be expected of me. Go big or go home. I decided to go big.

I can’t pinpoint the moment the second turning point from skater to athlete happened but as Jackers mentioned, over the years derby has become less about the fishnets and tutus and more about the skill and strategy of the sport. Our teams’ leadership with the backing of the skaters made it our goal to be a less of a rec team and more of a competitive team. With the commitment and vision of our training committee, board, and skaters we have become who we set out to be – competitive – not just with other teams but there is an interleague competitiveness that sprouted when we had enough skaters to form an All-Star team and the Backlash team. Both rosters are competitive and going to practice twice a week is no longer enough to make a roster. Most, if not all of our skaters go to the gym outside of practice to build strength, and most if not all also seek other skating opportunities.

The Punishers are family – we support and lift each other up. Like family, we also fight – we fight for roster spots, may the best athletes/skaters win.”
Sponagle: “I don’t know if I ever identified myself as being either an athlete or a non-athlete in derby because I was already a runner when I started, but I knew things were different the night I hit the floor and didn’t think of myself as an individual skater, but as part of a cohesive unit with a job to do. In the beginning, for me, derby was about getting past skaters or hitting jammers – but now, the focus is on strategies, being strong enough to keep those strategies solid, and having the kind of relationships with your teammates where you trust them and anticipate their moves. That might be along the lines of what people consider an athlete to be.” 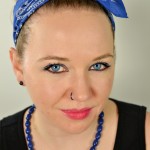