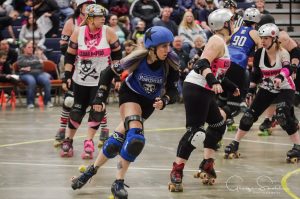 On Saturday, March 18th, 2017 the Prairieland Punishers of Decatur hosted a season opener at the Decatur Civic Center vs. the Cedar Rapids Rollergirls of Iowa.  The evening was a double header, packed with competitive derby from Central Illinois.  Following the Punishers’ bout, the Twin City Derby Girls of Champaign battled Midstate Mayhem of Springfield.

What a great night for derby and the Decatur community! 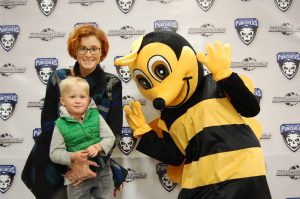 A record number of tickets were sold and nothing stopped the fans from pouring into the Decatur Civic Center to catch all the play by play derby action.  VIP seats sold out, and the bleachers were packed!  Free Punisher seat cushions were given out to anyone who came early.  The photo booth was hopping with fans of all ages and special guest Buzz the Bee from Decatur Earthmover Credit Union.  The Papa Murphy’s pizza booth sold out down to the last pepperoni.  The energy at this event was incredible.

The Punishers were guest coached by the knowledgeable and always colorful Wildstyle, who also coaches for the Twin City Derby Girls.  Bombshell Betty served as the team’s Bench Coach, while Atomic Mom handled the game outside the track at the ticket table.  2017 Punisher Coaches Tony Neutron and Codean Sweet Tea were bouting for the Capital City Hooligans mens’ roller derby team on the evening of March 18th and will be coaching our next home bout on April 22nd!

The Head Non Skating Offical (NSO) for the evening was James Peplow.  He was supported by several volunteers, which we call NSO’s of our Punisher Crew.  They serve in jobs like scorekeeper, line up tracker, penalty box timer, videographer or jam timer.  NSO’s get in free to the bout and enjoy a free nacho bar following the bout at our after party.  Thank you to all the NSO’s that volunteered!  See you next time! 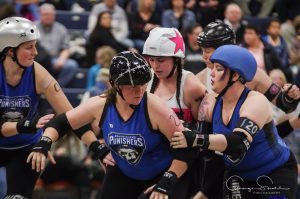 The evening kicked off with our national anthem sung by Hammer and Betty of the Punishers.  Vanna Wipeout announced the action of the first bout and Greg Harvey of GH None Productions announced the second bout.  A demonstration jam was played to help educate our fans on the basics of roller derby.  Prior to each jam, the entire crowd quieted as a referee yelled out “5 Seconds!” and a whistle cut through the silence to start the jam.

The Punishers and Cedar Rapids were head to head with jammer for jammer action.  Hair Razor, Jessica Rabbid and Wildkat returned to the scene as veterans to the jammer rotation.  New to the track was Malibruiser Barbi, who played her first game with the Punishers on March 18th. 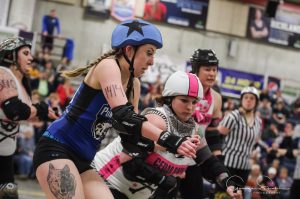 All the Punisher jammers have different strengths they bring to the team, and Bruiser is full of surprises!  The aggressive nature of derby occasionally has it’s injuries.  Malibruiser Barbi sustained a foot injury in the first half of our home bout and is now in recovery.  The result after x-rays was no broken bones, so she will return for the next home bout on April 22nd! 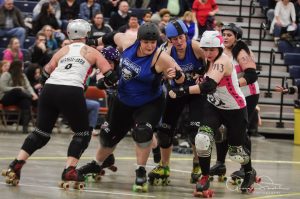 bout featured Punisher veterans to the blocker line up; Double Painbow, Hammer, Johnson, Krash King, Meek, PsyRN,      Rah-Kette, Smack ‘N Cheese and Sass Squash.  A new skater to the Punishers blockers was Graff-ic Content.  She fostered with the Punishers last season and decided to officially join the team this year.  Graff-ic comes to the Punishers as a transfer from the McClean County Misfits, a neighboring league from Bloomington who disbanded in 2016.

At halftime of the bouts, fans enjoyed a wheel game where the young and the young at heart try their luck on hitting a target in the center of the track.  The winner r 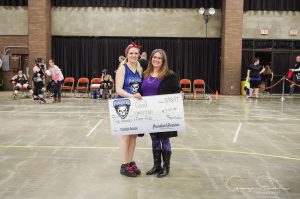 eceived a coupon for Punishers merchandise.  Free t-shirts from the Punishers and cozies on behalf of Earthmovers Credit Union were give-a-ways throughout the evening.  A check presentation of $545.00 was made to the Good Samaritan Inn, a donation of a portion of the ticket sales.   To date, the Punishers have donated over $26,000 to local charities, since they started in 2011.

The final score of the first bout was Cedar Rapids 196 – 188 Punishers. 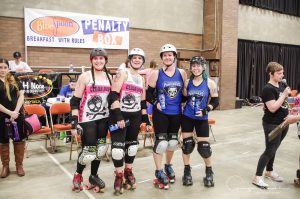 The final score for the second bout was Twin City 225 – 216 Midstate Mayhem. 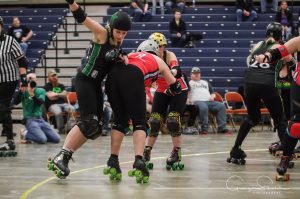 Both bouts were highly competitive and there were moments of greatness recalled from skaters and fans alike.  Following the bouts, fans asked for autographs from their favorite skaters and pictures at the Dynagraphics photo booth.  Several fans said “we’ll be back for the next bout!”  The excitement was simply contagious.

The Bourbon Barrel hosted the Official Punishers After Party, and volunteers, referees and skaters enjoyed a free nacho bar with vegan options.  GH None Productions provided the smooth grooves at the After Party to enjoy with our pints of root beer.

Join the Punishers for our next home bout on Saturday, April 22nd at the Decatur Civic Center as we take on the Southern Illinois Roller Girls at 6 p.m.

This double-header will feature men’s roller derby at 8 p.m. with the Capital CityHooligans taking on the Brigade of Handsome Gentlemen.  Tickets available at www.punishersderby.com.