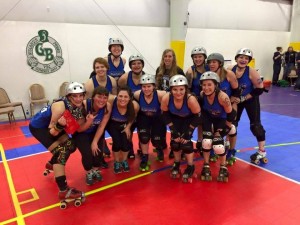 On Saturday, January 31, 2015, the Prairieland Punishers traveled up to Green Bay, Wisconsin to take on the Paper Valley Roller Girls. After a six hour drive, the Punishers geared up to face a formidable opponent. The bout started around 8pm with a demo jam quickly followed by the opening jam of the bout.
The Punishers quickly jumped to a 30 point lead as Paper Valley got into penalty trouble early. But midway through the first half, Paper Valley started whittling away at the Punishers lead and eventually regained the lead late in the first half and maintained a 10 point lead at halftime.

In the second half Paper Valley increased their lead to 50 as both teams got in to some serious penalty problems. In this half 3 Punishers and 5 Paper Valley Roller Girls fouled out of the game allowing jammers on both teams to capitalize.
In the last 10 minutes the Punishers started their comeback from 47 points down with a string of jammers getting lead jammer. Bob Gnarley started the shift with an 18 point jam to bring the score to 203-174. With a little more than a minute left in the game the Punishers were down 222 to 206. Only 5 skaters were left to play for Paper Valley and 2 blockers were in the box. The Punishers had 9 available skater and no one in the box. The jam started and Amanda Tori Suicide quickly got lead jammer. The Punishers wall did a great job at keeping the opposing jammer contained until she drew a penalty leaving the Punishers on a power jam. Suicide cut the lead to 222-221 as regulation time expired but with :50 still on the jam clock. She was able to make one more scoring pass to call the jam. The final score was 222-226 Punishers.
It was an exciting bout – there were tears in the eyes of all the Punishers. What a great way to start the 2015 season!!! A big thanks to the Punishers’ coach, Impale Ale, and bench coach, Even Stephens, for their effort in making the win possible.
MVJ-Amanda Tori Suicide MVB-Bob Gnarley